The Masters 2022 - All you need to know: History, past winners, when and where to watch

Here is all you need to know about the Masters 2022: full history, most titles, prize money, timings for the tournament which will be played between April 7 and 10.

Japan's Hideki Matsuyama celebrates with the green jacket and the trophy after winning The Masters in 2021. | Photo Credit: REUTERS

The 2022 edition of the prestigious Masters tournament, the first major of the year, is scheduled to be held between April 7 and 10 at the 7510-yards-long Augusta National Golf Course in Augusta, Georgia.

The site of the event was purchased from Fruitland Nurseries in 1931 and the course was designed by amateur champion Bobby Jones and architect Alister MacKenzie. The tournament was first played in 1934 when it was known as Augusta National Invitation Tournament. In 1939, it was officially renamed The Masters.

Winner of the event is presented with a green jacket, a tradition which formally started from the 1949 edition won by Sam Snead. The green jacket is won by members of Augusta National while present on the club grounds and thus, each title winner becomes an honorary member of the club. Winners are to submit the jacket the back to the club a year after their victory which can then be worn whenever they are present on the club grounds. By tradition, the winner of the previous year puts the jacket on the current year.

Apart from the jacket, winner also gets - their name engraved on permanent Masters trophy present at the club, Sterling replica of Masters Trophy and a gold medal. 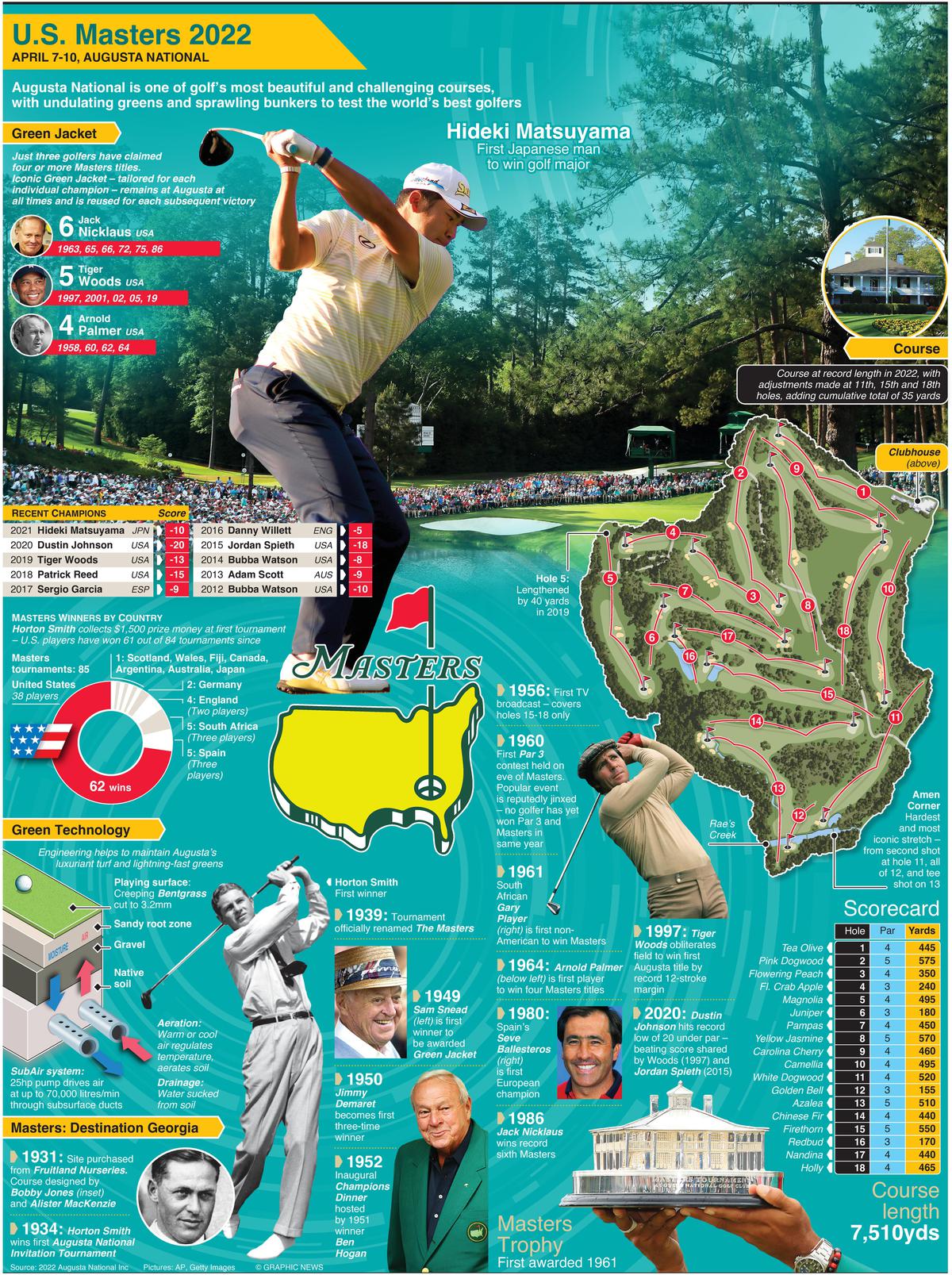 Most number of titles

The Masters usually has the smallest field with 90-100 players. The top golfers participating at this year's tournament include defending champion Hideki Matsuyama, the first Japanese man to win a major; five-time champion Tiger Woods who is making a comeback after nearly losing his right leg in a car crash last year; world number one Scottie Scheffler; world number two Jon Rahm and Northern Irishman Rory McIlroy who will attempt to complete the career Grand Slam of golf's four majors with a Masters victory.

A total of 91 golfers will be competing for the title over the next four days.

Since 1963, the tournament has the tradition of beginning with an honorary opening tee shot taken by one or more legendary players. For this year's edition, two-time champion Tom Watson joins fellow American Nicklaus and three-time champion Gary Players of South Africa.

All eyes on Tiger Woods

American legend Tiger Woods, 46, will be making his 24th Masters appearance but this time, it could be more emotional than ever before. Five-time champion Woods is coming back to professional golf after Masters 2020. He had his fifth back surgery two months later and was still recovering from that on Feb. 23, 2021 when he crashed his SUV over a median on a suburban coastal road in Los Angeles and down the side of a hill.

According to Reuters, Woods' injuries from that crash were so severe that doctors considered right leg amputation, before reassembling the limb by placing a rod in the tibia and using screws and pins to stabilize additional injuries in the ankle and foot.

When and where to watch

Best of Tokyo 2020: Aditi Ashok gets India to wake up and learn golf, finishes a remarkable fourth

The Masters 2021 Preview: Can Dustin Johnson retain his crown?